leading from
Perspectives on the Alien (and Predator) saga

It looks to me as if when Dan O'Bannon (who wrote Alien) worked on Dune in Paris, through Moebius and Alejandro Jodorowsky he would have found out about Hergé's The Adventures of Tintin and how these comic book stories were important in European comic book culture at the time and had in the strangest way starred to seep into aspects of Science fiction comic books since the 1950s and science fiction lore in general. I should say that we can see signs in Frank Herbert's Dune and Kubrick's movie 2001: A Space Odyssey.

With that, I think he started wondering how he could apply what he was learning about these comic books to be used in film script writing himself

The Pink Panther films had been coming out since 1963 and this is somewhat an oddity. A series of Pink Panther comic books started in the 1970s and became as it were an agreeable reference system where people could look at the covers and the pictures that they referenced, and perhaps find a new idea for themselves, so one can find traces of these things in artwork by, Dali, Giger, Foss, Moebius, Kirby, and so on. One can see how it was used in artwork for Jodorowsky's Dune production,  Ridley Scott's Alien (as if Dan O'Bannon was carrying on with a work method that he learnt in Dune), Alien Resurrection. Perhaps much of the interest in it died out by 2000

So I think that Dan used the films in a similar way that people were using the comic book covers to set off ideas for possible films, and once the Alien production started up, Ridley caught onto the idea.

The assumption seems to be cloudy because none of this appears to have been discussed in public in the slightest although we can read about Jodorowsky's and Moebius' appreciation for Tintin. But the rest comes across as a sort of trade secret if it's a secret at all. 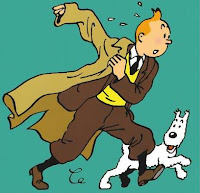 b) Alien life form via Tintin

b.ii) Pillows in the face become the facehugger

When searching for the missing jewel, the investigators Thomson and Thompson staying at the Marlinspike mansion have pillows from the sofa thrown at their faces and this become, and this becomes the idea of face hugger.

Also in The Adventures of Tintin: Red Rackham's Treasure, in the basement of Marlinspike where they encounter the globe that springs open to reveal the fabled treasure, this also becomes the alien egg that springs open like a jack-in-the -box

In The Adventures of Tintin and the Picaros, returning from a pyramid, when Captain Haddock delirious falls into the lake and encounters a fight between a python and a crocodile become the sensation of the chest burster biting its way out. Captain Haddock himself being given an electric shock and then a small electric eel popping out of the back of his sweater becomes the chest burster. Professor Calculus realises that this small creature could possibly grow to the length of six feet and stun a horse. Tintin soon finds a place to put the eel back in the water. This is not something that one would try to do with a chest burster so it seems. This scene comes out in the Tintin magazine at the beginning of the year that Dan O'Bannon came up with his Chest bursting scene.

b.iv) Owl,  Gorilla and hallucination of the pharoah as the grown Alien

Back in the Adventures of Tintin: The Castafiore Emerald, an owl in the attic becomes the growing monster after when it's first encountered, and then a magpie nesting outside becomes the monster afterwards, and these are the things that Tintin has to explore

In The Adventures of Tintin: Cigars of the Pharaoh is , Tintin enters a tomb, he sees a garment hung up on the a statue that becomes the chest burster's shed skin. Shut in a room, streams of gas pour in the drug him and this is transformed into the dripping water of the landing leg room, a hallucination of Tintin in a sarcophagus becomes the landing leg hanging in the air like an idol. He is soon drugged and has a hallucination of the pharoah in the wall images, reaching down to grab him, and this becomes the scene where Brett being grabbed by the alien and taken away.

When we look at Adventures of Tintin: The Black Isle, it's in the castle that we discover the money forging operation, and the gorilla on the loose becomes the alien protecting the nest or even as it goes the birth temple, which is the money printing room with it's printing machine.

When Tintin explores the magpie nest, this may well become the moment when the character Ripley discovers the alien nest with the human victims being as one would loosely say, transformed into eggs.

See also at the Alien Explorations blog: Alien by way of Tintin

c.i) The Pink Panther diamond in the case as the Alien Egg

c.ii) Kiss of life from Clouseau as the Facehugger

In The Pink Panther Strikes Again, it's when Chief Inspector Dreyfuss who recovering from a breakdown is visited by Inspector Clouseau, Dreyfuss falls into the water and Clouseau gives him a kiss of life and then a woman suddenly assumes that they are two gay men kissing, this becomes the moment of the facehugging.

c.iii) Dreyfuss as the Chestburster

The Pink Panther Strikes Again Dreyfuss escapes and moves into an apartment below Clouseau's. He drills a hole through Clouseau's floor to shove a periscope through, and Clouseau spills tomato ketchup on the floor and this lands on Dreyfuss's face. This becomes the chestburster scene.

c.iv) Cato as the Alien beast

Clouseau would often find that his manservant Cato would launch surprise attacks on him. In The Return of the Pink Panther, there is a scene where Cato could pop out of hiding in such places as the fridge to fight with Inspector Clouseau every time he enters his apartment, etc might as well be the alien's attack on the crew member.

In The Return of the Pink Panther, there is the scene where Cato is revealed to be disguised as a waitress in an Japanese restaurant, leading to a fight that starts of a brawl. As does the scene in The Pink Panther Strikes Again where Inspector Clouseau gets into bed with a character Olga and finds Russian operative Olga Bariosova launching another another surprise attack on him, causing all three to be hurled into the river when the reclining bed snaps back upright and crashes through the wall. In the final Alien film, the Alien beast is ejected out into space.

c.v) The Pink Panther as the alien beast

Something else to consider is that Giger's Necronom IV which was the basis for the Alien beast is on one level or two levels the Pink Panther seen from the side. Traces of this cartoon along with the cartoon version of Inspector Clouseau character can be found in much of his work since he connected with Jodorowsky's Dune production, but this painting more or less appears to be a biomechanised version of the panther seen in profile with the drooping side pipe along the middle of the side of it's head as the eye and the black goggle eye as it's nose. I might want to say that it would be mainly be the cover of Pink Panther #13 (1973) but there would elements of a number of other covers

See at the Alien Explorations blog: Alien: Development by way of the Pink Panther movies?

Posted by wmmvrrvrrmm at 03:43 No comments:

Perspectives on the Alien (and Predator) saga

Posted by wmmvrrvrrmm at 05:38 No comments:

Thoughts about who and what the Space Jockey is

leading from
Perspectives on the Alien (and Predator) saga

I suppose that in terms of the original Space Jockey, I think that it's the idea of an almost humanoid creature merged with his anti-shock seat and suit, and the ribcage is part of a capsule to seal the occupant in, but he could separate from the seat much as the Prometheus movie showed. Of course the original scenario for Alien had the idea that the pilot left his seat to go to visit the birth pyramid and get infected. Soon the pyramid had disappeared, only to become part of the ship itself, and the pilot had no further reason to leave his seat other than to escape the ship.

But another side to this entity is that everything was designed to be a biological extension of the occupant as with Giger's paintings. So this ribcage with the chest burster hole in it was a bone ribcage shell but not part of the occupants own internal skeleton, and in a way you could start to say it was a biological part of him in the abstract ways that Giger's paintings work.

The skull ought to have belonged to the occupant though. In the original design he would even have had a glass bubble space helmet, but they did away with that before the scene was shot.

When watching these films, I had given up on any idea about real continuity since Aliens was made, and don't think of these films together having their own universe any more, but I respect that some people might feel the need to continue to think this way

I'm much more interested these days in the idea of the Space Jockey abstractly evolving into the idea of the Engineer as if they're different perspectives of the same undefinable thing, and if there's another evolution of the idea, so be it. Going by the idea for the space jockey corpse in the planetoid landscape painted by Giger, it would have had a fairly abstract skeleton in comparison to a human. Perhaps the legs look fused together as one limb. Perhaps I might be interested in the behind the scenes discussions about who or what was what and the abstract ideas coming to the surface in the art department

I did take an interest in the Raised by Wolves "Space Jockey" style helmet with perhaps an android's head found inside, and didn't know what to make of it,  other than to think of this idea of an abstract chain of evolutions and that people expect David the android to be revealed to be the Space Jockey, even if that should look nothing like the one from the original film.

The speculations about who the Space Jockey is since Prometheus have began to remind me of who the Egg Man in the "I am the walrus" song and we might find while David the android somehow transplants himself into Beetles fandom and is revealed to be the Egg Man, that Paul McCartney was the Space Jockey all along

Posted by wmmvrrvrrmm at 05:15 No comments:

"Predalien breaking out through a cafe window surrounded by Paparazzi"

"Predalien breaking out through a cafe window surrounded by Paparazzi II"

It seems to be an attempt to revisit an earlier drawing done about five years ago seen here, and perhaps the earlier drawing was much better. If there's anywhere further to go with the idea, I could end up churning out the same old thing many dozens of times again to get there.


See also: "Predalien breaking out through a cafe window surrounded by Paparazzi I" (September, 2016)

Posted by wmmvrrvrrmm at 05:51 No comments: 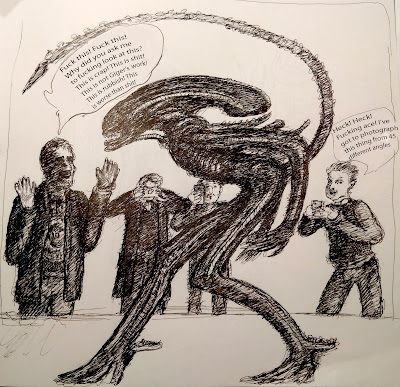 Posted by wmmvrrvrrmm at 16:54 No comments: 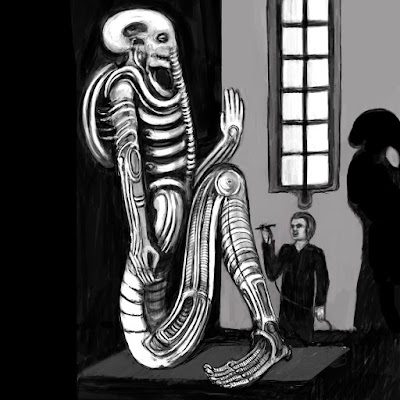 Posted by wmmvrrvrrmm at 00:54 No comments:


Posted by wmmvrrvrrmm at 08:32 No comments: